The G.A.A is an integral part of the Rosegreen community. It was founded in January 1955 and affiliated to the West Tipperary Board in that year. The club was successful in those early years and captured a West under 15 hurling title in 1957.

The following years saw the club earn some great victories over teams in the West. However no silverware was won. As with all small rural parishes during the 60s there was a drain of talent from the Club. This was mainly due to emigration to England and America.

The club was going into decline in the late 60s and a decision was made to disband the club in 1970. As a result, players eligible to play for Rosegreen now transferred to the Cashel Club. During this period Rosegreen was well represented at all grades on Cashel teams.

Because of the ever-increasing numbers of juveniles now living and attending Primary School in Rosegreen, it was decided to reform the Adult and Juvenile Club in 1981. The following year the club won an under 12 C Football West Final.

In the following years the Club continued to expand. A good mix of juvenile and adult teams were affiliated in different competitions in the West division. Numerous players transferred back from Cashel.

Success arrived in 1989 when Rosegreen Club recorded its first success at adult level, a West Tipperary Junior A Football title. This was the start of a relatively successful period for Rosegreen GAA Club. The following year saw the Rosegreen adult hurling team capture the West Tipperary Junior A Hurling title, defeating their near neighbours and fellow parishioners, Cashel. This game had generated a huge amount of interest in both ends of the parish and the game itself lived up to all the hype.

The first underage county title arrived in 1991. Our minor footballers were victorious in the the West final against Galtee Rovers. They accounted for Newcastle in the County Semi-Final and went on to capture the County title against Burgess.

The following decade brought intermittent success at all levels in the Club. However, it was felt that the adult football teams should have had more silverware and maybe even a county title. The first adult county title arrived in 2004. A concerted effort had been made in the previous couple of years. Focus had been placed on stepping up skill levels of players and also their physical fitness. Outside trainers were also sourced. It was at this time also that facilities were improved.

2004 will probably go down as the most successful year in Rosegreen GAA history to date. The adult club contested county finals in hurling and football that year. Unfortunately, the hurlers lost the county final against Kilruane McDonaghs. But the footballers made no mistake. The football team met Clonmel Commercials in Fethard in the county final. This game was a thriller. The teams could not be separated at full time. The game went to an exciting replay, which Rosegreen eventually won. There were very joyous scenes in Fethard that winter afternoon. Tears of joy were shed by men, women and children alike.

Today, the club have adult teams affiliated in Junior B hurling and Junior A football. The juvenile club is going from strength to strength with a large number of kids participating in our national games. The club in recent years has amalgamated with Rockwell Rovers at Under 14, 16, Minor and Under 21 level. Over the last six years (2010 to 2015 inclusive) the club has won 22 West titles in total, five of which were delivered in 2014, some of which were won as a result of the amalgamation with Rockwell Rovers. Rosegreen has also contested four county finals during that period.

For a club the size of Rosegreen, there has no doubt, been a huge amount of success over the years. Great credit goes to all those involved for their commitment and hard work. Rosegreen known as the “Little Village” ensures that whatever team takes to the field, 100% commitment is given. 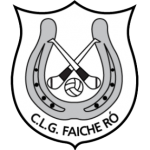 Hopefully Rosegreen teams will enjoy their share of same on the field of play in the years ahead! The uniqueness of the crest will make it immediately recognisable as the symbol of our Club. The crest will appear on all club attire in the future. The club wishes to acknowledge and thank David Hayde for his imagination and skill in designing such an appropriate crest for the Club.